Resources For families with dogs and babies! 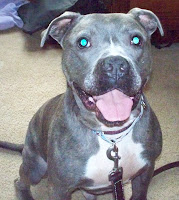 Meet Windsor, Windsor came from rough circumstances and has no reason to trust people but...he oozes love for all of us! 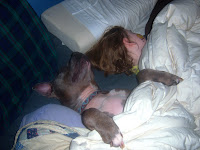 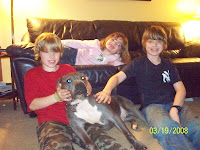 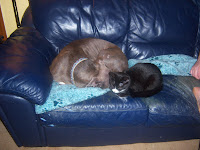 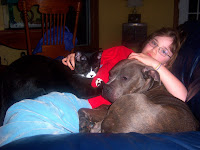 I refer to him as Mr. Enthusiastic. We adopted Windsor several months prior to finding out I was pregnant. I was ready for his energy and his challenges from his past. Well, he is all I wanted him to be and sooo much MORE! Windsor is the happiest dog in the world who never seems to keep all four paws on the floor at any one time. He dances when he walks and wiggles and waggles with glee. That said, he is also very strong and his energy can be overwhelming even on my best day. He is always learning and has come a long way in self control but...coming home with a baby and having his energy was a bit much. Needless to say we took it very slow with Windsor. We also did not know how he would respond to the baby in general as he came from a rough background.
We had prepared ahead but ...we knew this had to be a slower intro and I needed to be ready for it. So, for several days as I adjusted to being home and was recovering, Windsor was kept on leash and tethered in our home for periods of time so that he could observe Kelsyann and become familiar with her smells, actions and sounds, but so that he was not too much in my space. Windsor was used to the indoor tether and knew that there he could have his toys or treats. 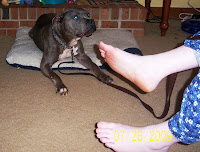 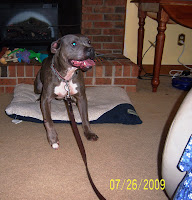 Windsor is on leash while I hold Kelsyann. He is being reminded to lie down on his bed.
At first he observed intensely and several times barked when Kelsyann cried during diaper changes but intense eyes turned soft after being able to observe and be included in daily activities. Dogs become comfortable and the baby becomes less novel when they are included from the beginning. It was so important that I only included him when I was patient and able to handle his energy. If I was not in the mood or able to handle him patiently then he was crated. Windosr began becoming familiar with Kelsyann by:
1. Tethering by his bed
2. Tethering in the room where I nursed (4 foot tether then 6 foot when calmer)
3. Loose when I had Kelsyann in the Sling 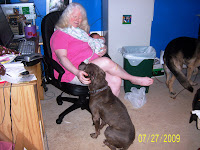 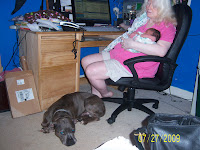 First photo Windsor sniffs Kelsyann through the sling. 2nd he receives attention from me. 3rd he relaxes at my feet.Using a sling allowed me to be hands free but also kept Kelsyann contained. Legs, arms all tucked in drew less attention due to less stimulation. I felt confident and comfortable with Kelsyann in the sling and Windsor loose. Windsor never jumped up and listened well to directions while I held her. He quickly acclimated to this and was able to be included for longer times like the other dogs.

In a short time Windsor adjusted well to having Kelsyann in our lives. As seen in the photo below...he is no longer reactive to Kelsyann's crying. Time, patience and safe comfortable expossure allowed him to adjust to Kelsyann at this stage. Does this mean happily ever after? No, it means that we have done well for this stage. Living with a baby and dogs means constant adjustment, managment and planning. We have many more successes to support all of our dogs through. Stay tuned!
Posted by Dogs & Storks at 10:07 AM